Yesterday was Brandon’s 26th birthday, and we had a fantastic day! I took a half day at work and told him we could spend the afternoon doing whatever he wanted.

We drove half an hour north to Santa Rosa, where Brandon is from. Our first stop was JoJo’s sushi where we ordered a few rolls to tide us over until lunch. Next, we went to Brandon’s favorite dive bar, The Round Robin, to play pool.

Later in the afternoon we met Brandon’s mom at La Rosa for dinner and margaritas. We split the fajitas, but at this point I was already feeling pretty stuffed from our late lunch. 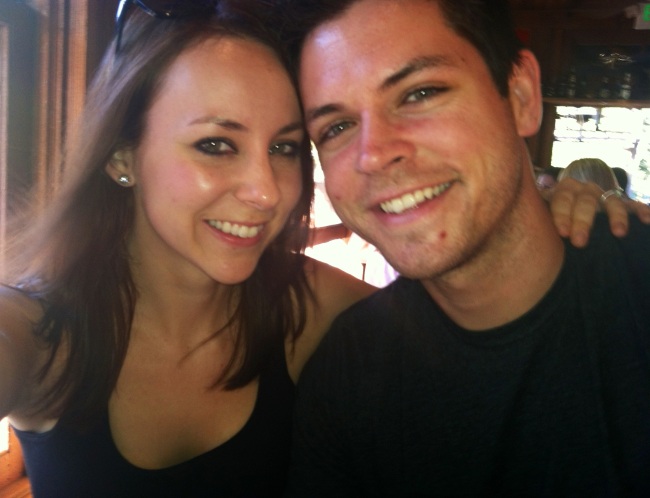 After saying goodbye to Brandon’s mom we headed over to Third Street Ale Works to meet friends. We had a great time laughing and chatting with friends and eventually, our friends surprised Brandon with this monstrosity: 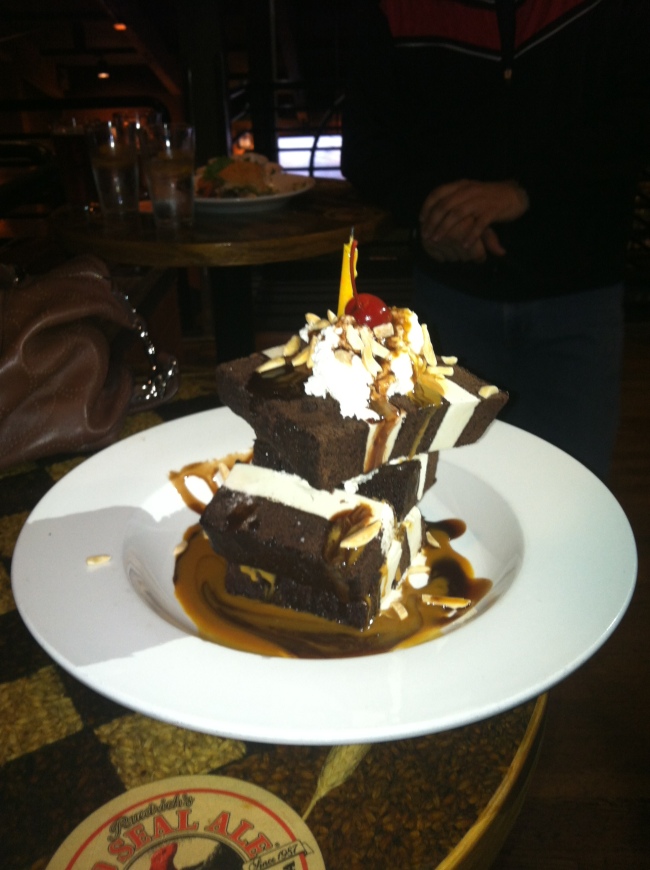 This ice cream cake was insane and definitely resembled the game Jenga! Most of our friends had already gone home at this point, so four of us were in charge of polishing off this cake. We powered through it somehow…

Yesterday was a day for indulgences. Between the food, margaritas and cake, I was feeling quite stuffed and was certainly not in the best shape waking up this morning. Brandon had a great birthday, though, and I enjoyed spending time with Brandon and our friends and family so much. So while it wasn’t the healthiest day, it was well worth it! I know that part of finding balance is allowing for indulgences and days off, and I wouldn’t have changed a thing!

And it felt so good! I finally joined a gym three months ago after years of yoga as my main workout. After a few months of cardio + strength workouts, I’m in the best shape of my life and have been feeling so much more confident, energetic and strong. But earlier this week I realized something was missing– my muscles are sore, my body feels tight and I’m not nearly as flexible.

My gym offers yoga on Mondays and Wednesdays so I decided to check out a class. Every yoga instructor is different, so I wasn’t sure what to expect. I usually enjoy yoga classes that are higher intensity and have me sweating a bit. Instead, the instructor chose a slower pace that focused on hip stretches. Quite honestly, the stretches were nearly excruciating! Especially since I have issues with my left hip, spending an hour focusing on slow, painful hip stretches was difficult to say the least.

At the end of the class, I didn’t feel as invigorated as I usually do after a high intensity yoga class, but I did feel wonderfully relaxed. While part of me felt I had missed out on a cardio workout, I realize that health and fitness is about total body health and flexibility is a huge part of that!

So…lesson learned. I’m going to make an effort to attend a yoga class a few times a month to balance cardio and strength work with flexibility. I can’t wait to yoga again soon!

Welcome to My Happy Place! On my little corner of the blog world I chronicle my shenanigans with my fiancé, puppy, friends and my journey as I try to find a happy balance between love, fun, work, health and fitness.